The youngest and yet the oldest

Valdarno di Sopra is one of the latest DOC among the Denominations of Controlled Origin established with the modern regulations of the 60’s.

And yet the production of high quality wines was so deeply rooted in these territories that Cosimo III de’ Medici in 1716 realized the need of protecting Tuscan wines of Chianti, Pomino, Carmignano and indeed Valdarno di Sopra, from forgeries.

During the 19th and 20th century, wines produced in Valdarno di Sopra were progressively grouped under the Chianti name, initially in a generic way and then in the sub-zone Colli Aretini. The same happened with Carmignano, re-born with its proper name only in the 60’s and with Pomino where it was decided to distinguish their wines under thed Chianti Rufina denomination.

For the wines made in Valdarno di Sopra the association with Chianti wasn’t doing justice to the complexity of local productions. Many “Supertuscan”, acquiring a well known reputation among insiders, were made with the grapes grown in this area. We are talking of wines made not only with native grapes varietals, mainly pure Sangiovese and also Pugnitello, Foglia Tonda or white Malvasia, but also from foreign grapes like Merlot, Syrah and Cabernet Sauvignon that had little or nothing to share with the Chianti disciplinary.

The need to qualify wines by their place of origin and personal style has required a return to regulations that, as was already understood in the 17th and 18th century, acknowledged the differences and personalities of singular production areas and their high quality significance. 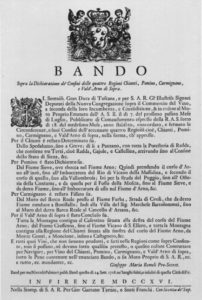 We are located in the Eastern and Western slopes of the valley of river Arno (Val d’Arno) between the Arezzo plain and the Florentine hills. Climate conditions are certainly favorable to grape growing and the area is classified as intermediate in the Rocchi scale. This means that negative climatic trends tend to be of weaker intensity compared to the positive ones. The Appennine area of central Tuscany is under the influence of a temperate cold climate but is affected, especially in the summer, by the Mediterranean climate which positively determines the end of the growing cycle allowing a complete and progressive maturation avoiding harmful extreme conditions.

Average rainfall varies from 550 and 700 mm, with a concentration of 70% in the autumn-winter period.

The DOC Valdarno di Sopra area has overall similar soil and climate conditions but it does include soil variations that contribute to distinguish the quality of the wines here produced. The most represented lithologies are those typical of the most suitable wine growing areas of Tuscany. This area holds rock formations of the Tuscan series from lower Miocene like sandstones with little percentages of calcite, scyst and in minor quantities marl and fine sandstone with quartz and feldspar or higher in carbonates. (A. Scienza e L. Toninato – Milan University – 2003 zonation)

The 1716 decree by Cosimo III acknowledged the high quality wine production already extensively consolidated and renowned at the time and deriving from a very ancient tradition.

Etruscans were already making wine in the 4th century BC. In the 1st century Plinio the Elder mentions the lands surrounding Arezzo as the best for winegrowing and refers to the numerous grape varietals here cultivated. In middle ages it’s thanks to monks if grape cultivation is protected from theft and devastation. The Florentine cadastre of 1427 mentions, besides the technical cadastral quotes, the value of the products obtained in different areas, ranking in fact by merit and price, the wines of the time.

During the agricultural transformations that took place between the 16th and 18th century the first specialized vineyards are grown and viticulture is developed with a more scientific and entrepreneurial attitude. With the decree of Cosimo III this area is historically bestowed as a land destined to the production of quality wines.

With the 13th June 2011 Ministerial Decree, this forerunner delimitation of origin is institutionalized with the “Denominazione di Origina Controllata” attribution to the wines of the “Val d’Arno di Sopra” or “Valdarno di Sopra”. Actually already in 2005 the wines of Pietraviva were made into a DOC that has now been included in the new Valdarno di Sopra that recognizes two sub-zones, Pietraviva and Pratomagno. The disciplinary has been then modified and adjusted to the OCM European laws as DOP wine with the 07.03.2014 Ministerial Decree.

What are the main features of the Valdarno di Sopra DOC.

In the Valdarno di Sopra DOC the following wine types can be made: White, White Spumante, Rosè, Rosè Spumante, Red.

A kind of passito wine can also be made from white grapes.

The forthcoming future of the DOC Valdarno di Sopra.

After the first years of activity, the Consorzio has decided to amend the disciplinary. Essentially in fact, producers are asking to extend the borders of the DOC to those identified in the Cosimo III decree simplifying the disciplinary by abolishing the 2 sub-zones and expect organic certification as an essential requirement for membership. The reason is the firm belief that wine quality and land protection are closely related. This way the Valdarno di Sopra Denomination would be the first totally organic one in Italy. Another achievement for the Tuscany of wine!

It is possible to download the transcript of the Edict dated 24 September 1716 here:

This website uses cookies to improve your experience while you navigate through the website. Out of these cookies, the cookies that are categorized as necessary are stored on your browser as they are essential for the working of basic functionalities of the website. We also use third-party cookies that help us analyze and understand how you use this website. These cookies will be stored in your browser only with your consent. You also have the option to opt-out of these cookies. But opting out of some of these cookies may have an effect on your browsing experience.
Necessary Always Enabled
Necessary cookies are absolutely essential for the website to function properly. This category only includes cookies that ensures basic functionalities and security features of the website. These cookies do not store any personal information.
Non-necessary
Any cookies that may not be particularly necessary for the website to function and is used specifically to collect user personal data via analytics, ads, other embedded contents are termed as non-necessary cookies. It is mandatory to procure user consent prior to running these cookies on your website.
SAVE & ACCEPT