Valdichiana is one of the most authentic strips of Tuscan land.  It stretches along the Florence-Rome road ramification south of Arezzo and straddling it between the provinces of Arezzo and Siena.  Its prestige is superior to its territorial importance, even if the latter has never been underestimated.  Such stature has been attained by its great children, products of the land and livestock farming.

Travellers passing through Valdichiana will not easily forget the alluring view of the range of hills departing from Arezzo moving towards Castiglion Fiorentino and Cortona, descending to Chiusi and making their way up the opposite side of the valley towards Torrita di Siena, Sinalunga, Montepulciano, Lucignano, Marciano, Foiano, Monte San Savino and Civitella in Valdichiana.

The grapes destined for the DOC "Valdichiana Toscana" wine production are partly produced in the area covering the South-eastern part of Tuscany up to the Florence-Rome road ramification covering  a portion of the administrative territories of the towns of Arezzo, Castiglion Fiorentino, Civitella in Valdichiana, Cortona, Foiano della Chiana, Lucignano, Marciano and Monte San Savino in the province of Arezzo and the townships of Chiusi, Montepulciano, Sinalunga, and Torrita di Siena in the province of Siena.

THE ORIGINS OF WINE

In Etruscan times, Valdichiana, an area which presently stretches along the Southeastern part of Tuscany up to the Florence-Rome road ramification, was called the "Breadbasket of Etruria". However, its hills were already dotted with vineyards. Later 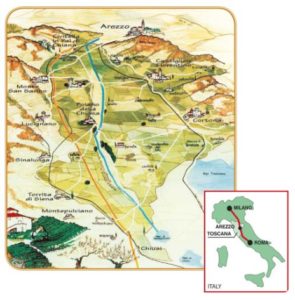 on, Plinius the Elder would describe the quality of these wines as follows: Talpone (red) and Ethesiaca (white). This was a vine growing culture spreading over the hills of the Tuscan part of Valdichiana surrounding the important commercial centres of Cortona, Montepulciano and Arezzo.

The importance given to this economical activity was confirmed in the following years in successive stages in the writings of the Bishopric of Arezzo.

During the 1800's, the merchants of Bourgogne and Champagne decided to use the wines of Tuscan Valdichiana due to their renowned quality as a base for their champagnes after the phylloxera or vine-pest had destroyed their vineyards.

The wine making tradition was enriched and endorsed in the late 60’s and early 70’s with the DOC guarantee of origin recognition.

THE HOSTORY: FROMTHE FIRST POLICY DOCUMENT TO THE CURRENT OF 2014

The first policy document of 1972 only protected the denomination of the “Virgin White Valdichiana” type. Later, the policy document was modified and enriched to include the entire selection of wines produced in the Tuscan Valdichiana
In 1989, the DOC guarantee of origin was extended to the sparkling and spumante types. In 1993, output was lowered and modified. Later, in 1999, a production policy was put in action for white berry types (chardonnay and grechetto), red berry types (red, rosato, sangiovese), and Vin Santo, thus fulfilling the aspirations of the producers after more than thirty years. In 1999, the DOC guarantee of origin also varied the name “Valdichiana” and in 2011 with DM 22/11/11, the “Tuscan Valdichiana” denomination was further varied with the aim of giving the exact perception that the wine produced there comes from the part of the Valdichiana that is situated in the Tuscan region in the provinces of Arezzo and Siena, thus allowing the plan of promotion to strengthen the fundamental, unique, strong, and essential bond with its territory.

It is possible to download the 50th anniversary brochure here: