The Vin Santo is a product that has its roots and origins that are lost in the mists of time, it has always been made in Tuscany with techniques passed down orally from father to son, as a precious heritage. The name, which means “holy wine”, no doubt refers to its use in religious ritual, notably the Roman Catholic Communion, though there are other interpretations of its origins. 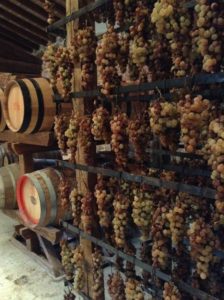 Vinsanto is one of various types of 'straw wine': wines traditionally made from grapes left to dry out on straw mats after harvest. The drying (called 'appassimento') of harvested grapes could be done inside over a period of weeks or months, by hanging the bunches from rafters or extending them over cane or straw mats. The mats are placed in the warmest, driest part of the winery (known as vinsantaia) so the grapes gradually desiccate over the winter. This process concentrates the grapes' natural sugars (they usually lose around 60% of their original volume) and thus the flavor of the wine they make. A typical vinsanto offers aromas of apricots and orange blossom, followed by a caramel, nut and raisin-rich palate with a hint of honey.

After the grapes have dried out (3–6 months), they are gently pressed and the resulting must fermented. In Tuscany the harsh winters are often so cold as to delay or even stop fermentation, and the solution to this is to kick-start the process with a starter culture (madre) taken from the previous year's wine. Once fermentation is over, the wine is left to age in small wooden barrels called caratelli. These caratelli are completely sealed, they cannot be topped up to compensate for natural evaporation and this inevitably results in slight oxidation. This contributes to the wine's rich amber color. Ageing lasts for a minimum of three years, although some producers leave their wines for as long as ten years.

Vinsanto wines are known to have been made since at least the Middle Ages, and have become a traditional part of Tuscan life. They are offered as a welcoming drink to house guests and sip on special occasions, often consumed with almond cantucci biscuits.

The wines are still produced widely today, and were finally recognized under DOC law in 1997. Although vin santo is generally classed as a dessert wine, its sweetness levels vary: most are made sweet (amabile) or very sweet (dolce), other wines are almost completely dry (secco), made from grapes which have not been left to desiccate so completely, they undergo a more rigorous fermentation until almost all of the sugars have been converted to alcohol.

It is possible to download the Vinsanto del Chianti DOC procedural guideline here: